If You Only Knew

If You Only Knew

When you see the heart-wrenching commercials asking for just $19.00 a month to save these poor animals who wouldn't donate?  Who wouldn't like to help animals from a life of misery and inhumane treatment? The problem is some of the animals you see in the commercials and on the internet do need help, but waiting for help from the HSUS, Grey2K, the ASPCA and PETA is like waiting for paint to dry. Grey2K and the HSUS donate only 1% of their donations towards helping animals and they run no shelters so where can they take these animals for help? They can take your donations to help themselves, but your donations don't really help the animals you intended it to. The ASPCA at least does run some shelters and does help to some degree.

PETA is in a league of its own. PETA kills way more dogs and cats than it helps. As you donate to PETA they run one shelter that is a killing machine. Last year, 2019, PETA killed 65.20% of the dogs and cats they took in. If you are alarmed by this  you shouldn't be because this is really good for PETA. This is the lowest percentage since at least 1998 or 20 years ago.

I seriously doubt this is what you thought your donations were go to.

In 2014 the HSUS agreed to pay Ringling Brothers, owned by Feld Entertainment, over $15,000,000 because of a paid a witness in the lawsuit

This is part of the story showing what the HSUS and a few other organizations did.

HSUS and animal rights groups the Fund for Animals, Animal Welfare Institute, Born Free USA (formerly the Animal Protection Institute), the Wildlife Advocacy Project, the law firm of Meyer, Glitzenstein & Crystal, and several current and former attorneys of that firm, paid the settlement for their involvement in the case brought under the Endangered Species Act (ESA) that the U.S. District Court ruled was "frivolous," "vexatious," and "groundless and unreasonable from its inception." Today's settlement also covers the related Racketeer Influenced and Corrupt Organizations Act (RICO) case that Feld Entertainment filed against the groups after discovering they had paid a plaintiff for his participation in the original lawsuit and then attempted to conceal those payments.

Two years before this judgement the ASPCA paid $9,300,000 to Feld Entertainment as part of the same frivolous lawsuit for a total of $25,000,000 that in reality neither the HSUS or the ASPCA really paid. You paid that with your donations to help save animals.

These are the good things about the HSUS, Grey2K, the ASPCA and PETA.  Now for the bad.

The founders and highest ranking officers of most of these organizations have participated in and have been speakers and keynote speakers at many Animal Rights Conferences for more than 20 years. If you're not aware of what an Animal Rights Conference is it is basically a 3 to 5 conference that many speakers with direct connections to the Animal Liberation Front, ALF, gather a couple of times a years and along with the speakers hold workshops that have to do with ending animal agriculture.

The main goal of ALF, and now also Direct Action Everywhere, DxE, is to have everyone become vegan. In order to be a member of ALF you must be vegan.  This isn't to say all vegans are bad, in fact I would say the majority of vegans are no different than anyone else, they just choose to eat differently than most people.

The difference between ALF/DxE vegans and all other vegans is ALF/DxE vegans wants to push being vegan on everyone. They want you to eat no more meat, drink no more dairy and put an end to horse and greyhound racing. Ending all animal agriculture is their end game. Even if you are a vegan do you want to destroy all kinds of animal agriculture?  Is your goal to have no more pets? No more pets is a goal of ALF and it is one of their main goals.

I'm sure you have seen the HSUS ads asking for JUST $19.00 a month to help save the animals with pictures in some animals in very poor condition. 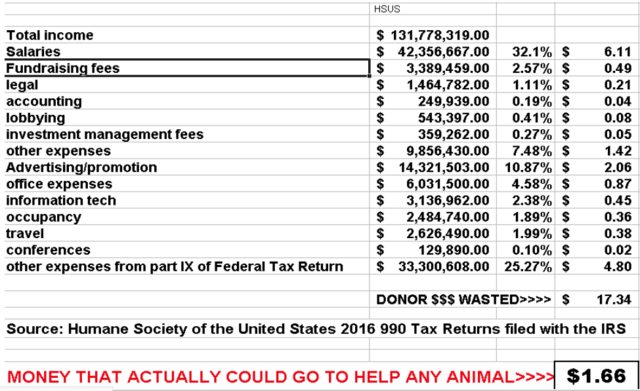 Here is a short clip and in it you will see disgraced ex-CEO of the HSUS say we don't give money to animal shelters and talk about the "language" that says that.  the "language" is more than likely the small print that you have trouble reading.

The part referenced above is at the 6:19 mark.

These organizations are all 501-c-3 or 501-c-4 non profits meaning they pay no federal income tax. Even with deductions imagine how much money they would pay in taxes on $2,000,000,000. Taxes that could be going to help the poor, going for education or any other worthy cause. Your donations weren't intended to end up in the pockets of the upper -management people of these organizations.

Re: If You Only Knew